Leather shoes, charms preserved by the ancestors - and a poem by William Allingham ....

This faery loves her hedgerow-home and woods beyond most things. But, all Magics know that in order to spy and scry the unlearned and the unseen, we must travel sometimes - far away from our familiar trees and leaf-mould paths.
So it was that on the day following Flora's Day, The Great May-Dawning - I found myself gazing at this shoe ... 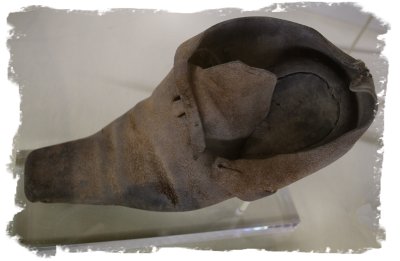 A left shoe, (superstition says that it must be a left shoe if it's to be used as a talisman) - from around the 14th century - found embedded in the walls of Wells Cathedral (Somerset).  A long ago symbol of hope for the great stone building, placed in the walls as a charm against negative spirits. 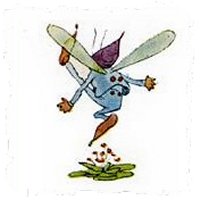 The shape of this shoe, and the soft sueded leather reminded me of faery-shoemakers. Not the dainty kind, for walking in the bluebells, but those skillfully crafted by the elfin and leprachaun cobblers of old from leather, wood and iron. (Picture at right is by Johnny Gruelle 1917)

A few rain-swept days later, a tiny Folk Museum in Clun (Shropshire) entranced me with these clogs - tiny, made for a human-sprig of no more than four years old. They have iron under toe and heel, shaped like a horseshoe, wooden soles and strong dark-leather uppers. Aren't they beautiful? 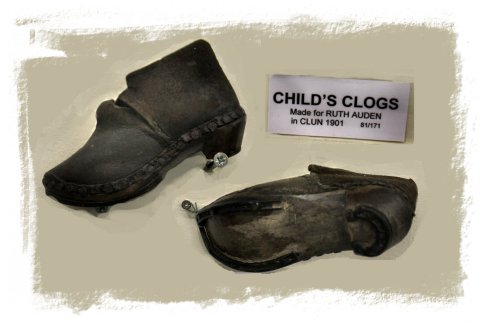 Do you know the poem by Irish poet William Allingham telling the legend of the Irish leprachaun shoemakers? To catch one, and hold him long enough to be granted a wish was considered the absolute pinnacle of good fortune - and many a huntsman tried.
Lepracaun cobblers are not such helpful magics as the elves who assisted the poor shoemaker and his wife in an the famous tale by Brothers Grimm - here's the story ......
The Lepracaun or Fairy Shoemaker
Verse 1
Little Cowboy, what have you heard
Up on the lonely rath’s green mound?
Only the plaintive yellow bird
Sighing in sultry fields around,
Chary, chary, chary, chee-ee!
Only the grasshopper and the bee?

‘Tip-tap, rip-rap,
Tick-a-tack-too!
Scarlet leather, sewn together,
This will make a shoe.
Left, right, pull it tight;
Summer days are warm;
Underground in winter,
Laughing at the storm!’

Lay your ear close to the hill.
Do you not catch the tiny clamour,
Busy click of an elfin hammer,
Voice of the Lepracaun singing shrill
As he merrily plies his trade?
He’s a span
And a quarter in height,
Get him in sight, hold him tight,
And you’re made
Man! 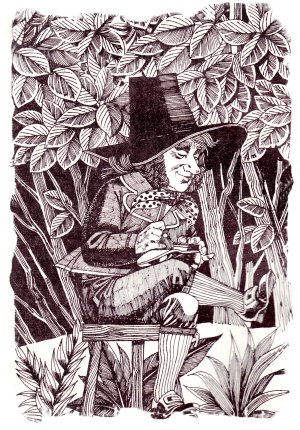 Illustration by Richard Hook from 'Great Fairy tales of Ireland' Mary Mcgarry - pub Wolfe 1973
Verse 2
You watch your cattle the summer day,
Sup on potatoes, sleep in the hay;
How would you like to roll in your carriage,
Look for a duchess's daughter in marriage?
Seize the Shoemaker—then you may!

'Big boots a-hunting,
Sandals in the hall,
White for a wedding-feast,
Pink for a ball.
This way, that way,
So we make a shoe;
Getting rich every stitch,
Tick-tack-too!'

Nine-and-ninety treasure-crocks
This keen miser-fairy hath,
Hid in mountains, woods, and rocks,
Ruin and round-tow'r, cave and rath,
And where the cormorants build;
From times of old
Guarded by him;
Each of them fill'd
Full to the brim
With gold! 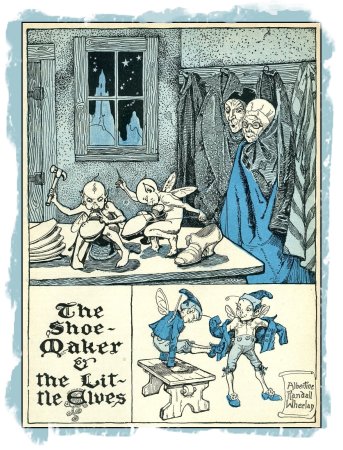 I caught him at work one day, myself,
In the castle-ditch where foxglove grows,
A wrinkled, wizen'd, and bearded Elf,
Spectacles stuck on his pointed nose,
Silver buckles to his hose,
Leather apron—shoe in his lap—

'Rip-rap, tip-tap,
Tick-tack-too!
(A grasshopper on my cap!
Away the moth flew!)
Buskins for a fairy prince,
Brogues for his son,
Pay me well, pay me well,
When the job is done!'

The rogue was mine, beyond a doubt.
I stared at him; he stared at me;
'Servant, Sir!' 'Humph!' says he,
And pull'd a snuff-box out.
He took a long pinch, look'd better pleased,
The queer little Lepracaun;
Offer'd the box with a whimsical grace,
Pouf!  he flung the dust in my face,
And while I sneezed,
Was gone!
William Allingham      c1870

Now it's well known that faery-folk love their shoes, but only those made in the style of the ancestors. If we can't have those, we simply go bare-foot.
Here are some folk who make 'boots, buskins and brogues' fit for faery feet   .........
'NP Historical Shoes' hand make medieval shoes carefully copied from originals found in museums, or designed from the information and amazing drawings of Netherlands historian and leather-worker Olaf  Goubitz.

Handmade medieval leather shoes by NP Historical Shoes
Image © nphistoricalshoes - used here with their kind permission
You might be lucky enough to get hold of a copy of Olaf Goubitz' sadly out of print book "Stepping through time: archaeological footwear from prehistoric times until 1800.".﻿
If you enjoy seeing and reading about traditional celebrations, you might also like Muddypond's DiaryBlog where she has some words and pictures about this years May Day - Beltane

Posted by Muddypond Green at 16:51

It looks great, I really like it!
formal shoes || leather shoes || shoes brands ||

Thanks for sharing the post here. Keep up the good work. All the best.