Faery Rings a-plenty, all ready for the Samhain dance ... 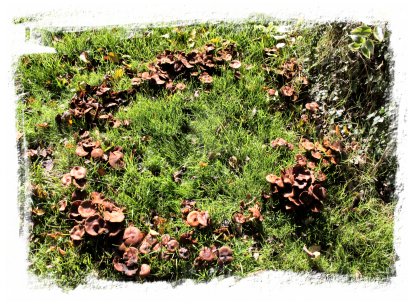 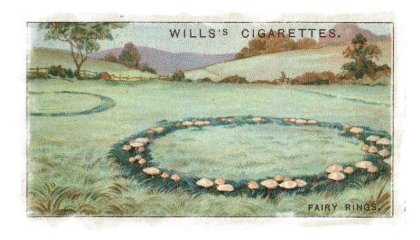 This old collector's card from 1926 'Do you Know' Series 3 asks 'Do you know the cause of fairy rings?'. The answer is on the back ... "An old writer gives the following quaint explanation : the elves are fond of dancing in the meadows, where they form those circles of a livlier green known as Elf-dance. If any should at midnight get within their circle, the elves become visible to him,    and they may then illude (elude) him.﻿
Botanists tell us that when a group of fungi bears seeds or spores, and then dies and decays, young fungi spring up in a tiny ring round them.  As new fungi make their appearance, the ring gradually enlarges as the food material (decaying animal and vegetable matter) inside the ring is used up." 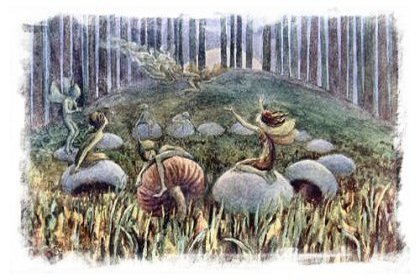 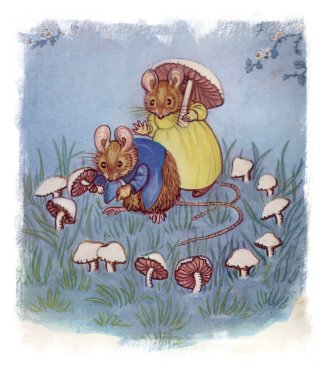 Illustration by Katherine Wigglesworth from
Alison Uttley's 'Snug and Serena count to Twelve' pub Heineman 1959
Fairy Rings (part 1)
Softly in the gloaming
Flitting through the vale,
Faiy-folk are roaming
Over hill and dale.
Pixies in the hollow
Elves upon the height,
Let us follow, follow
Through the paling light.
Follow, all unbidden
To the grassy glade,
Wrapped around and hidden
In the forest shade. 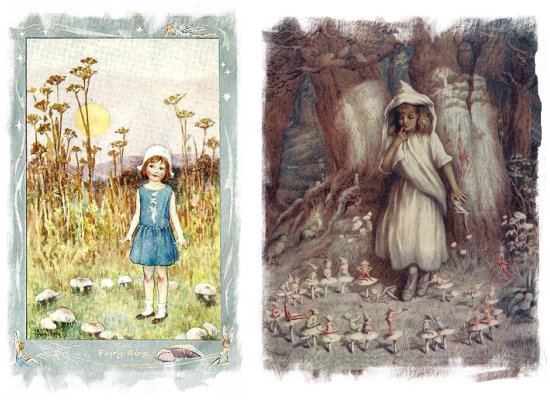 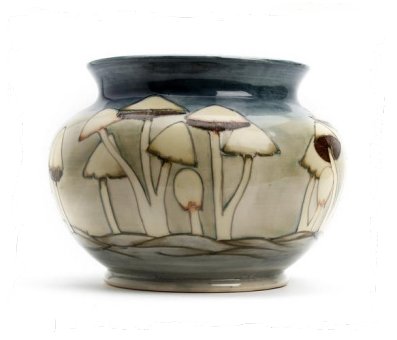 The 'Fairy Ring Vase' by Moorcroft
Fairy rings - made excusively by us magical faere folk are the source of much speculation and folk-lore. They are not - as is sometimes reported 'hag-rings' made by witches dancing!
No way - it's US what does them!!
All mortal beings know (I hope) that it is dangerous to enter a ring - and even moreso by moonlight! Some tales tell of kidnappings and folk who are never seen again - some tell that you are impelled to dance until you drop and then thrown from the circle in the dawn dew years later.
W.Y Evans Wentz quotes a spoken source in his 'Fairy Faith in Celtic Countries' 1911 in the section 'Precautions against Fairies' as saying : 'I remember how an old woman pulled me out of a fairy ring to save me from being taken.'
How very wise that old woman must have been! 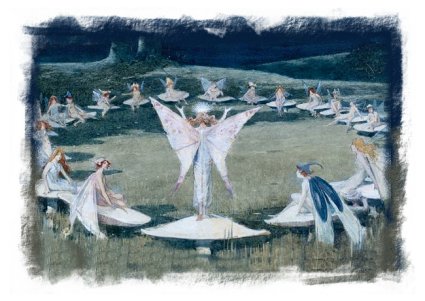 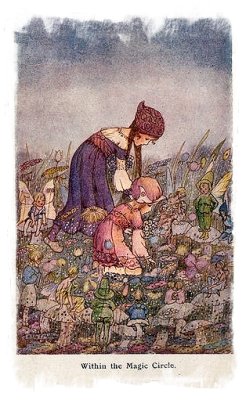 Vintage postcard by Hilda T Miller
NB:  As it's so nearly Samhain, or The Eve of All Hallows, you could be interested in the Ogham magic and folklore of the ancient but poisonous Yew Tree - here on Muddypond's main website.
Posted by Muddypond Green at 15:50

So beautiful a realm here..magical and enchanting..and pure bliss!
Victoria