The Tale of the Sad Swan Song and the Good Sir Terry Pratchett ......

This Bitter Earth!
Now you see, swans are magickal birds. there is no disputing this - and so it has been - throughout time. Did you ever see a swan, carrying its cygnets on its back - wings raised as railings - a floating play pen? I think Sir Terry must have! 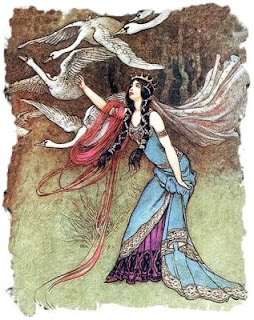 'The Six Swans'- Warwick Goble - from 'The Fairy Book'. by Dinah Craik - pub: Macmillan & Co.1913.
It is a matter of the utmost bad luck to kill a swan - they partner for life and grieve woefully if parted. Not only this - but you never know if the swan you're watching, paddling gracefully against the river, isn't really a  maiden, a fae princess transformed for a while to reflect her feathers in the lake. 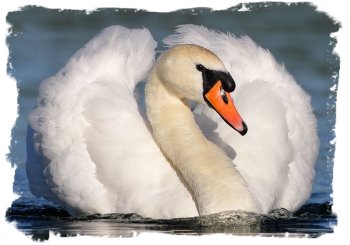 Mute Swan - this picture is from Mike Atkinson - Bird Photograper extraodinaire.
Someone in Britain then, is in for some extreme bad luck - thirty-one swans - thirty-one living, loving, magickal beings﻿ - they have killed, shot, and more wounded, in the last month. A reward has been raised, to find the malignant-one. You can read more about this blackest deed in the news - a report from today's national newspaper - but be warned - some of the pictures are upsetting! 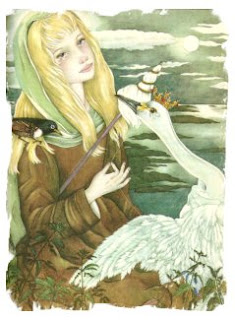 'The Wild Swans' - Adrienne Segur - from The Golden Book of Fairy Tales
pub: Classic Golden Books - reprint available here
Sir Terry Pratchett - incandescent with disbelief and rage - has offered a further £10,000 - I hope the killer is found. I know the killer has brought upon himself the bad luck which is sure to ensue from his meddling with souls  - thank you for your help Sir Terry - I hope also that someone will give the reward to a caring charity. Perhaps they could try swanmagic.co.uk!
Video from 'Wintermood'
Think on't pernicious swan-slayer! - think on't!
Posted by Muddypond Green at 12:07