Muddypond went to a profoundly bewitching concert for the Samhain festival – music to dream by – music to dance to – magical music to wonder at. She thinks that she MUST introduce you to the music makers if perchance you have not already met. 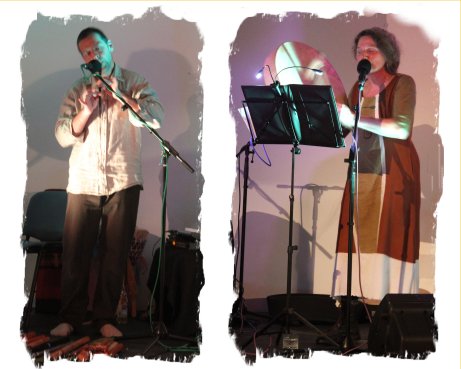 
Nigel Shaw and Carolyn Hillyer are ‘Seventh Wave Music’ and so much more. From Dartmoor, in the southwest of England, their music is inspired by ‘wild nature, sacred land and ancient mythology’.
Below, you could listen to a tiny part of Nigel's composition 'Dartmoor Symphony'. Played with the Ten Tors Orchestra, this movement is called 'Water'.
'Dartmoor Symphony' - 'Water' by Nigel Shaw - video uploaded by Merripit


Nigel is a traditional flute maker, and makes most of the instruments that he uses in his concerts and recordings.  Carolyn is a drum maker, sourcing skins from journeys to the Arctic. They’ve recorded many albums, both solo and working together, ranging from music for meditation, music blending their own with native recordings -  to wild dance. 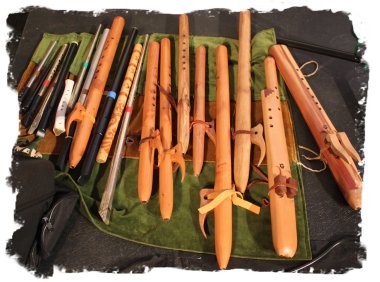 Traditional flutes, mostly made by Nigel, onstage and awaiting their turn.
They run workshops in both native flute and drum making, and Carolyn operates weekend workshops for women. They also organise 'Rivenstone', a festival of sacred world music and ancestral roots. These are held on their farm in Dartmoor.
Information about workshops, events and an online shop to buy music and instruments can all be found here at Seventh Wave Music.

Posted by Muddypond Green at 12:25