Returning to my autumnal wood from the far away and very warm climes of middle India, I found a whole series of perfect fly-agaric mushrooms gleaming amongst the hazel roots, moss and brown leaves. 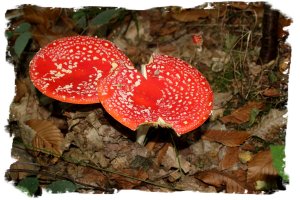 Explaining to the new friend who'd travelled with me back to the deep English countryside - all the way from Madhya Pradesh - that these mushrooms are poisonous, simply made him look at me long and hard!
'Same smart colour as my silk dhoti kurta,' he laughed. Then he bit into one, polishing off two big chunks and grinning in his most challenging manner.

His name is Yoddha. 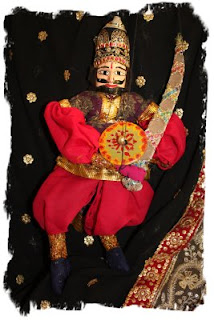 Yoddha insists that he has a strong, wooden constitution, and that he's used to injesting poisons - they make him strong.  Like cobra venom apparently. It doesn't seem to have done him any harm I have to say. 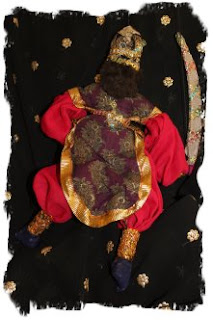 'Yoddha',
he says, means
'Belligerent Warrior'
in his native Hindi.
Hmm - perhaps I should have left him in India.
Yoddha's a puppet in the Rajasthan tradition and I met him near the wonder of the Khajuraho Temples. 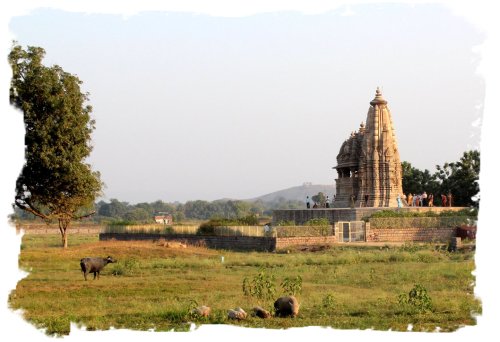 What attracted me most to Yoddha was his hand-made -ness. I just loved all the rough stitches in his jewelled clothes. The night I first saw him, he was performing - he could save a glittering Princess with his curved scimitar while she fled from a three-headed cobra, girating her hips provocatively all the while.
No wonder he can eat fly-agaric without a qualm! 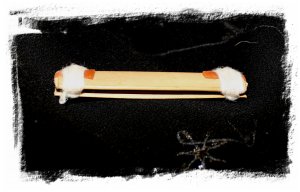 Following the old village traditions, the puppet show was given by three generations of one indian family, following skills handed down over centuries.

Grandfather was the Master Puppeteer.
He made them come to life - making their voices squeak, grumble and whistle through a simple reeded bamboo instrument, reminiscent of a gazoo, which he held between his teeth. 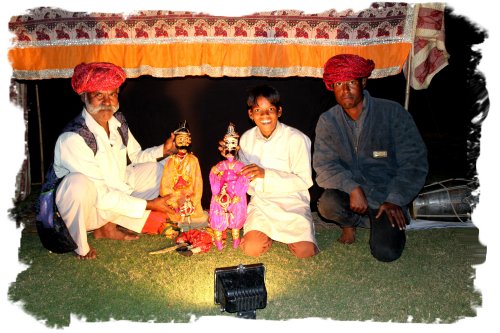 A three generation family of Puppeteers at Khajaraho 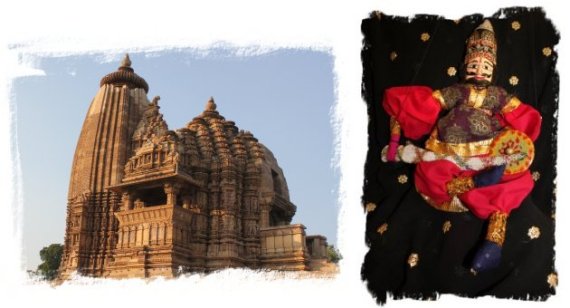 One of the twenty 9th - 11th century temples re-discoverd at Khajaraho - and my Puppet Yoddha
You might like to read about the Full Moon Festival for November 2011 - the Kartik Purnima - held in Varanasi, India, on the banks of the Ganges - it was beautiful - I was there.
The pictures are on my faery website here.
Posted by Muddypond Green at 18:56