Of summer wild orchids and the satyrs of the woods .....

Wild orchids are very abundant in and around my faery wood this year. It's been a strange mixture of early spring sunshine and then weeks of rain in England - and that seems to suit them.
Faeries love them in all their species, magickal plants of Venus - with a strong link to Capricorn. The ancient name was Satyrion - named for the pesky and lustful half-goat satyrs that roamed the ancient woods, chasing fair ladies!
My pictures show the flowers from late April until the June bee orchid, just two days ago .... 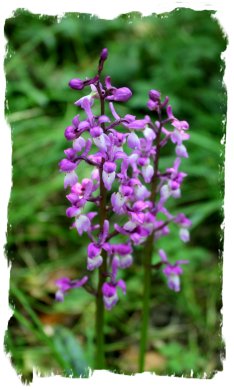 Early Purple Orchids - flowering among the bluebells in Spuckles Wood 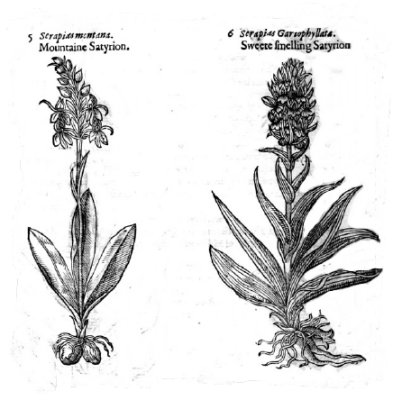 'Satyrion' or Orchis - from John Gerarde's Herbal, 1597
*  The root - known as Salep - was dried and used as an aphrodisiac for the male (from sympathetic medicine -  as the shape of many of the tuberous roots resembles the testicle). It was also given as a pick-me-up supplement for invalids and convalescents - here's an extract from an article of the 18th century explaining how to prepare and administer the root .....


"Let a spoonful of the fine powder of  Salep  be well mixed with a quart of cold water, and then set upon the fire. It must be kept incessantly stirring, and gently boiling, til a little of it when cool appears a perfect jelly ….
Before it is taken from the fire, either a little mace , or cinnamon, or lemon peel  is put in, or none of them at the patient’s option. Sugar and wine are added likewise as the physicians say, ad libitum."
From the "Gentleman's magazine and historical chronicle, Volume 37" of 1767
*Please note well my friends - these are medicine from far away and mortal ancestors -
not to be tried by faere folk! 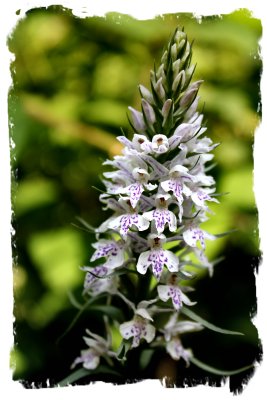 Common spotted orchid in Hurst Wood
Our faery-friend-amongst-humans, that wonderful artist and rhymer Cicely Mary Barker took a more gentle view of the flowers - with never a mention of the lascivious little satyr .... Ms Barker knew her mythology though, as both her orchid species faeries are fellas .... 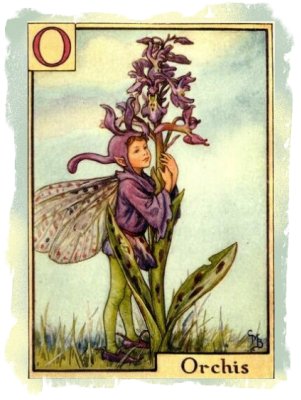 'The Orchis Fairy' Cicely Mary Barker from 'A Flower Fairy Alphabet' Blackie 1934
The Song of the Orchis Fairy
The families of orchids, they are the strangest clan,
With sports and twists resembling  a bee, or fly, or man;
And some are in the hot house, and some in foreign lands,
But Early Purple Orchis in English pasture stands.
He loves the grassy hill-top, he breathes the April air;
He knows the baby rabbits, he knows the Easter hare,
The nesting of the skylarks, the bleat of lambkins too,
The cowslips, and the rainbow, the sunshine, and the dew.
O orchids of the hot-house, what miles away you are!
O flaming tropic orchids, how far, how very far!
Cicely Mary Barker 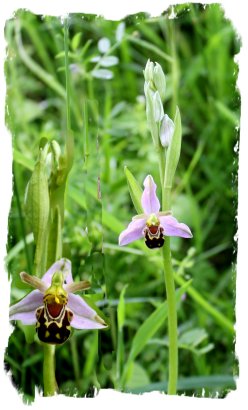 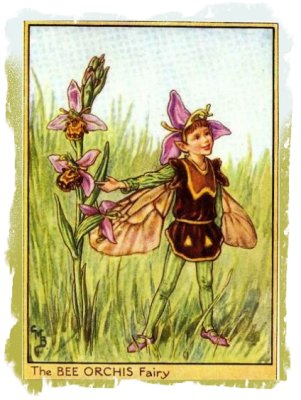 'The Bee Orchis Fairy' from 'Flower Fairies of the Wayside' Blackie 1948 by Cicely Mary Barker
In Greek mythology, the boy Orchis was born from the union of a nymph with one of those very satyrs. He was a lustful son, and killed by the Gods for his perceived insults to a Priestess. Seeing the grief that Orchis' father carried after the death, they allowed the boy to be reborn as a herbal plant, in which guise he could do no more unwanted damage to the fair damsels. 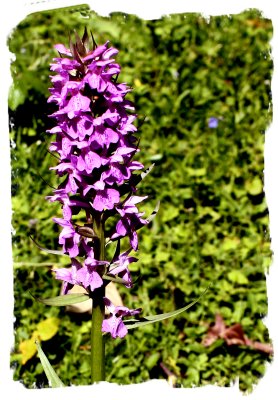 Purple Spotted Orchid - in the sunshine of a Kentish woodland clearing 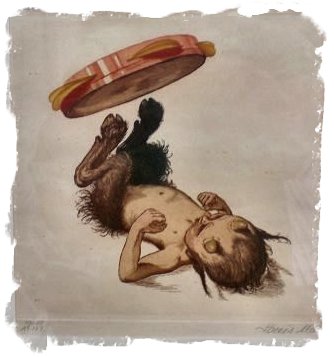 'Faun with tambourine' Louis Moe c1938
Satyrion -  orchid root - often obtained nowadays from Turkey can be mixed with wine and used as a ceremonial libation taken by a couple when blessing their handfasting.  Use only with advice and with caution!
Here is a link to a comprehensive bank of wonderful British Wild Orchid photographs, useful for identication .... at Ophreys Photography.
You might also like the newest musings over on the main Muddypond Diaryblog on the 'Birth of a new Medicine Drum'
Posted by Muddypond Green at 20:18