"Its tops, leaves and flowers are full of virtue; they are aromatic,
and most safe and excellent in female disorders."
- Culpepper 1653 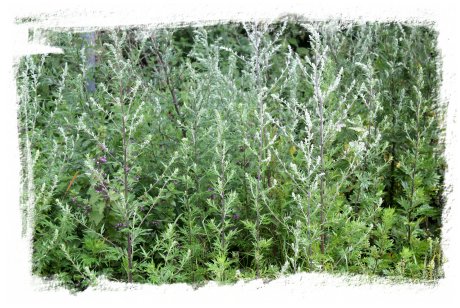 Wood Guardian & Hedgerow Faery Plea .....  DON'T buy expensive herbs for your work - use the wild ones that grow in such profusion all around us!
The benefits of mugwort, artemesia vulgaris, and its uses in a little magick have been known by herbalists for centuries - and who do you think pointed them in the right direction? Well, we did of course - us fae - and most importantly - the hedgerow fae.
Let me see -  mugwort is sacred to the huntress goddesses Diana and Artemis, both of whom could relieve disease in women. A herb feminine ruled by the planet Venus and of the earthern element. It is a relative of the wormwoods, the family famed for the major roll they play in the making of absinthe, and has an intangibly strange, minty, aniseedy scent. 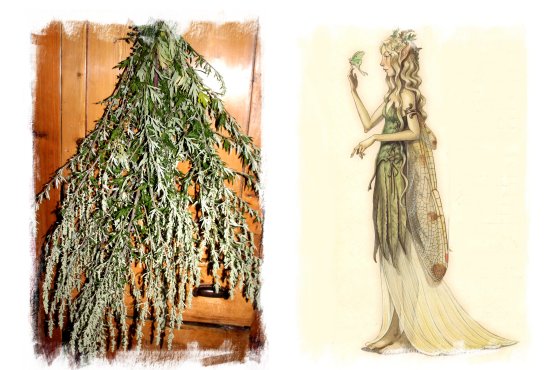 Above - fresh mugwort drying at home
The faery is by Toni DiTerlizzi (website here)  and from his book 'Arthur Spiderwick's Field Guide'
The plant enjoys sunny places and is common in England along roadsides and on neglected building ground. This is the time to harvest some stems and hang them to dry in an airy space.  They are better cut when the grey wands of tiny flowers are still in bud.
In a few weeks, cut the bunch up small, using the leaves, flowers and stems (not too woody) - then chop or blitz them ready for use as a herbal incense, or to sprinkle in fires in wishes for protection and clearing negative energies.. 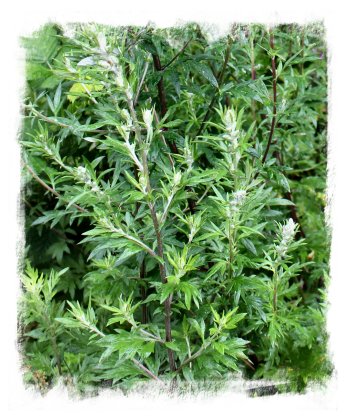 Mugwort is a visionary herb - it should be used in any rituals of divination or scrying - particularly during the full moon. The herb, fresh or dried can be steeped in a little boiling water (enough to cover) for half an hour, then strained. The liquid is useful then to cleanse a scrying mirror (faeries do not use the crystal ball - but really prefer to scry with a dark dish filled with clearest spring water).
As a bringer of prophecy and dreams, the dried herb can be packed into a sachet or little pillow placed dircetly under your head as you sleep.

Above ... last year's dried mugwort as herbal incense.
Harvested last week, my freshly made mugwort smudge-stick.
While your mugwort harvest is still fresh, take a bundle of long side shoots and tie and roll them into a 'smudge stick' or a 'smudging wand'.  Smudge yourself with the smoke before a ritual, smudge your workspace or the rooms in your home for protection and clear vision in making decisions.
You can learn how to make a good smudge stick, and read more about the arts of
Magical Smoke here at Muddypond's Ecoenchantments website
Posted by Muddypond Green at 14:29