To the Little Gentleman in Black Velvet - the folk-lore of Mole .... 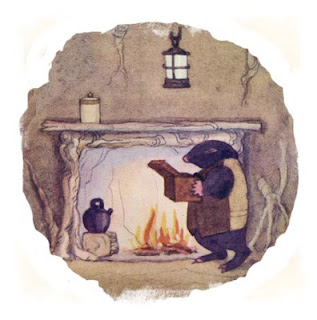 Illustration - Margaret Tempest from 'Moldy Warp the Mole' by Alson Uttley pub:Collins 1940
Among the madness of the deliberate devastation of  wildlife - the horrendous and stupefyingly unnecessary threat of the British Badger Cull, and the almost unoticed near extinction of our hedgehogs through pesticides and urban encroachment - one fellow at least is doing well! (Sign the largest and most urgent anti-badger cull petition here - or learn more) (Read more about the plight of British hedgehogs here on my blog)

Moley - The Little Gentleman in Black Velvet - the Mould-Warp - still enthusiastically excavating our wild meadows and cricket pitches, still delving and delighting. Still with his place in the heart of folklore and children's literature. 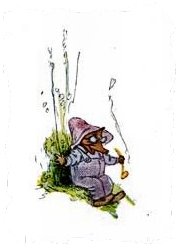 We can thank our relevant Gods that the cruelty of an ancient 'mole' superstition is now only a shadow over past times. Poor Moley's feet, you see, were believed to be lucky if hung about the neck, also advantageous in the cure of toothache in those terrible pre-dentist times! The main trouble with this being, the charm only worked if the feet were cut from the living mole, and then the little creature must be left to die, not dispatched.

Why fairy-folk and wood guardians of the past allowed this nonsense to get about I cannot imagine - but then - won't those yet to be born ask that about the 2013  Badger Cull if  (Lord of the Greenwood forbid) we enable it to go ahead?

Three illustrations above by Johnny Gruelle from 'The Molehill at Menemshia Creek' pub:Volland 1917

Pleasanter beliefs run:
A mole making fresh hills in a meadow brings fine weather.
Deep burrows forewarn of a severe winter to come.
If you clear mole-hills on St. Sylvester's Day (Dec 31st), the mole will dig no more near that place.
Moles will not touch earth where blood has soaked. 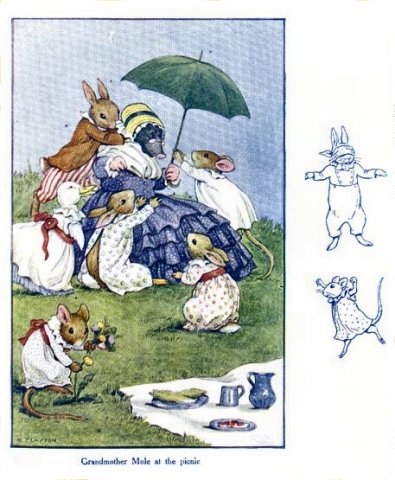 More worryingly - folklorist Marie Trevelyan, in 'Folk-lore and Folk-stories of Wales' 1909 collected the following:
'If a mole burrows under a wash-house or dairy, the mistress of the house will die within a year. If a molehill be found among the cabbages in the garden, the master of the house will die before the year is out.' 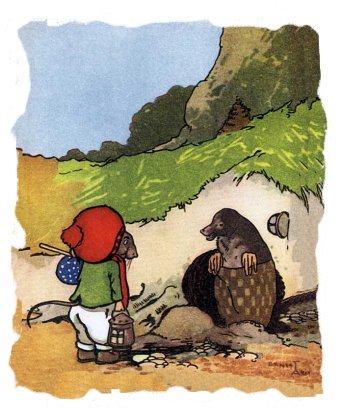 'Here's to the Little Gentleman in Black Velvet' - is actually an 18th century toast drunk by the followers of Queen Anne!
In February of 1702, Sorrel, the war stallion of King William 111 fell over a fresh mole hill (or a Wanti-tump) thrown up by an eager 'mould-rat'. King and horse crashed to the ground, the King breaking a collar-bone which festered and within a month William was dead.

Here are those first immortal lines from Kenneth Grahame's 'The Wind in the Willows' - to fill you, like Moley, with a promise of Spring: 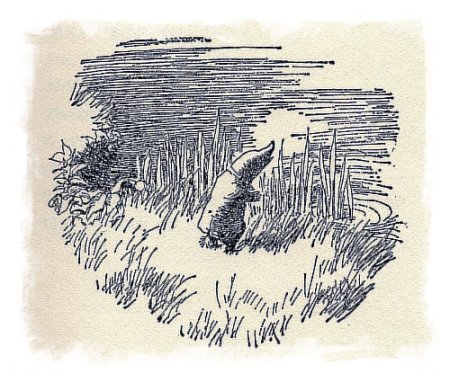 'The Mole had been working very hard all the morning, spring-cleaning his little home. First with brooms, then with dusters; then on ladders and steps and chairs, with a brush and a pail of whitewash; till he had dust in his throat and eyes, and splashes of whitewash all over his black fur, and an aching back and weary arms. Spring was moving in the air above and in the earth below and around him, penetrating even his dark and lowly little house with its spirit of divine discontent and longing.'

We faere-folk love you Moley the Mould-warp - a toast then of sweetest mead -
'To the Little Gentleman in Black Velvet'.  Cheerio!
Posted by Muddypond Green at 16:08