Where have all the Hedgehogs gone - long time passing ? .....

Update:  March 7th 2013 - there's more about the hedgehog plight - and the wonderful artwork of  Franchesca Yarbusova for her husband Yuri Norstein's film 'Hedgehog in the Fog' on Muddypond's main website - new here.


Well?  When did you last see one? When Muddypond was a faery-sprig no taller than the bracken - there were plenty of hedgehogs - don't you remember? Snortling little families, nosing their way through tall grass, rustling in the leaves and sleeping under log piles.  Once as visible in the evening light as the other inhabitants of the woods, although always shy. 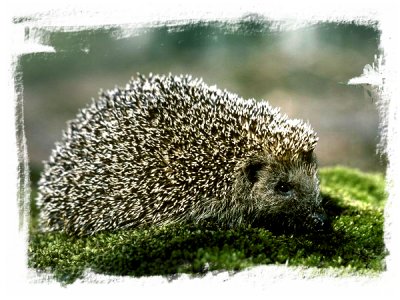 Now, how we miss them in the hedgerows and the gardens. How many, many plants did they save by chewing up the gristly slugs and happily eating up other delicious but malicious pests? Where did they go? 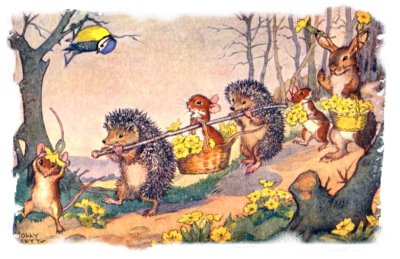 I know things were never easy for them - what with those roads - and poor things, they never did understand that rolling into a prickly ball was no match for a lorry, or even the smallest car. But at least they were THERE!  So beloved were they, that the Royal Post Office issued a stamp to show them how much a part of us they were .... 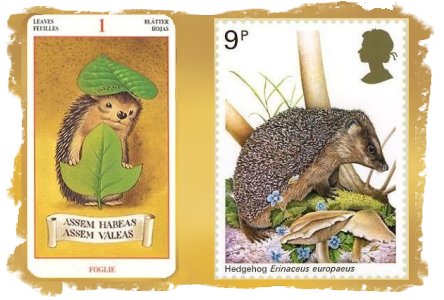 The card on the left is one of a famous deck of Fairy Tarot, by Antonio Lupatelli.
The quotation means 'A Penny earned is a penny saved'.
On the right, a British postage stamp issued in 1977

But now, the experts say -  (and you can read all about their plight here in The Guardian) - the hedgehogs have gone from a population of millions to just a quarter of their number in the last couple of decades. If something isn't done, they could be extinct in Britain in just as many moons! 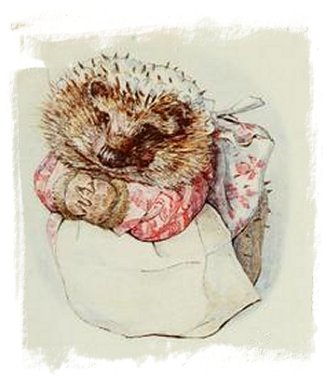 Our beloved washer-woman - Mrs Tiggy-winkle, the tale told and drawn by Beatrix Potter in 1905

The problem is, that  gardens in town and country have become inaccessible, fenced, concreted, surrounded by roads. The creatures need to rove widely, and now there are less and less places for them to go.
Out in the open country, the fields where they once adventured after dusk to find their fat caterpillars and crunchy bugs are drenched in pesticides. 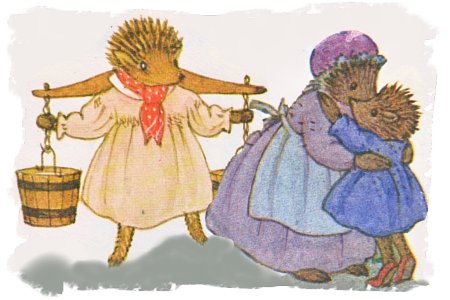 What must we do as a matter of urgency?  The very first step is to stop using chemical slug pellets - the hedgehog will take a poisoned slug, and eating a few will be the death of him.

And .... join in the nationwide scheme to make gardens accessible once more, by making a small hole in the hedge , wall, fence to join with neighbours and out into the fields so that these dearest of creatures can roam and hunt freely again  - Hedgehog Street.

Find out more about the Hedgehog Street campaign here 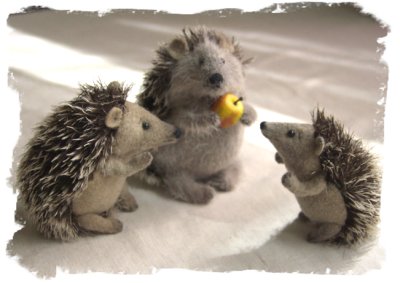 Perhaps, in time, and with a little care on our part - and a meeting with the neighbours around and about - we might be lucky enough to see a little scene like the one below. As a Wood Guardian and Hedgerow fae, Muddypond Green fervently hopes so. 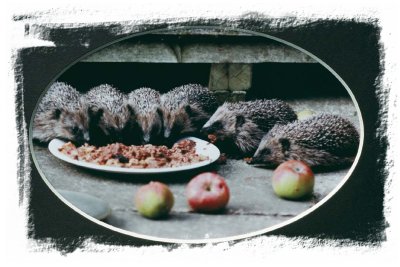 Posted by Muddypond Green at 19:21

oh, cool. This is the second time today hedgehogs have come through my little computer screen. Thank you. I never knew about hedgehogs and the danger they are in. Thanks again.

Very interesting fact about hedgehogs. I would very much like to acquire and add those hedgehog stamps to my collection. Can anyone help me to achieve that??? I will check back for any replys Thanks

Hi :-)
The picture you are interested in shows only one stamp - the one on eth right - the other is a Tarot card.
The stamp is from a wonderful set designed by Patrick Oxenham, 1977.
There are plenty of genuine sets and individual stamps from the set for sale on Ebay. If you type 'British Wildlife Stamps' into the search box, you will find them straight away.
Happy hunting :-)