Flowers of the faeries - the daffodil - a little magick .....

The Asphodel,  The Narcissus,  The Lentern-lily - call it what you will, it is a faery-flower - and there are few flowers specially chosen for their use. She is ruled some say by the planet Venus, others say by Mars depending on her species. Her Element is water.


The flower is commonly used in spells and lesser magics that have to do with 'affairs of the heart' - but since the fae do not have hearts so to speak - we tend to make the enchantments for mortals.

Also considered a flower talismen of luck - pick the earliest one that you see in bloom, press it and keep it close, or present it to another, bound with a silver thread. This is true in many parts of the world, and in China the bulbs are forced and brought indoors as a charm for the home.

The daffodil or historic 'asphodel' is the birth flower for those born in March - having the old flower-language meaning of 'unrequited love'. If given as a flower bouquet they were also a symbol of high regard and respect.


Do take care though, for the daffodil - like so many flowers beloved of us magics - has another and much darker side to its reputation. Some say the flower can be eaten, but they're very bitter you know - and in medeival times Narcissus pseudonarcissus (the wild species) was used as an emetic.

Here's a tiny extract from Culpeper's Herbal' on the subject ....
'Yellow Daffodils are under the dominion of Mars, and the roots thereof are hot and dry in the third degree. The roots boiled and taken in posset drink cause vomiting and are used with good success at the appearance of approaching agues, especially the tertian ague, which is frequently caught in the springtime ....' 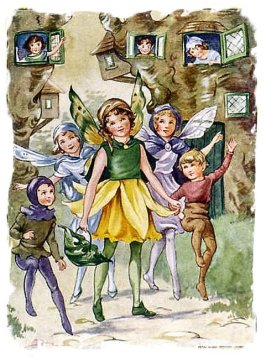 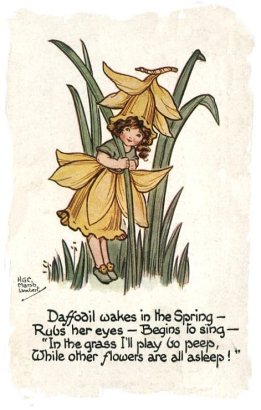 Postcard by H G C Marsh Lambert c1910
Then, there's the superstition held by some (but certainly not the fae!) that a single daffodil can be a warning of forthcoming death. It's an odd thought, held in common with meany flowers of early spring! the words of Robert Herrick follow here to show you my meaning ..
Do be prepared to be cheerful! ... 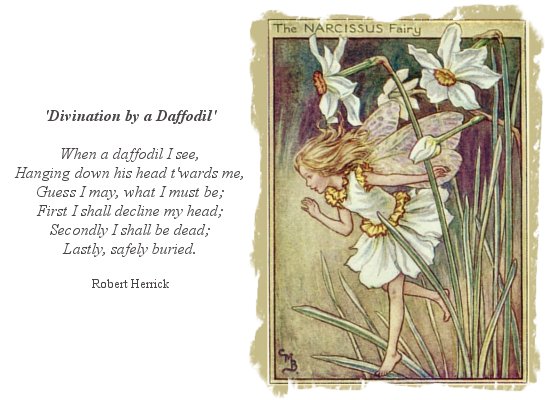 'The Narcissus Fairy' by Cicely Mary Baker
﻿
Posted by Muddypond Green at 15:27

The postcard is my favourite, so much information, thank you!

This hedgerow fae is pleased that you liked it Kadeeae. Thank you for saying so ;-)