Down faery lanes with the last of the blackberries ... 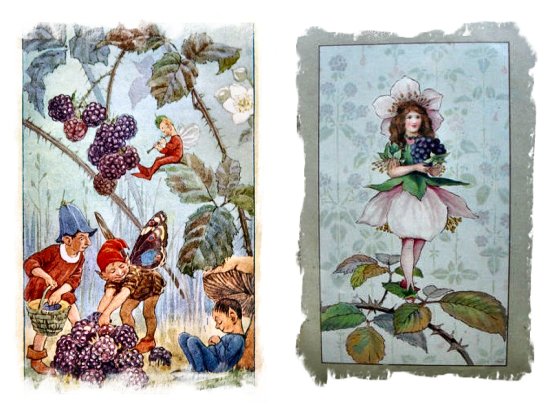 Illustrations by Margaret Tarrant
left: from 'Wild Fruit Fairies' by Marion St John - right: Vintage postcard 'Fairy Blackberry' pub. C W Faulkner
There's a lot of faery magick in the blackberry plant. Most importantly, it is the ruler of the Ogham Tree calendar from 2nd - 29th September where its true name is Muin. Folk legend tells us that the fruit shouldn't be eaten after the old Michaelmas Day which was October 10th.
When you pick the berries for all your delicious puddings remember to leave a few for us fae - we love them too and might just take our revenge if you pick them all!  (I won't tell you what we might do - but if I were you I'd take care not to find out!).
The leaves, steeped in boiling water, make a soothing tea packed with vitamins and antioxidants.
You can read lots more about the magick of the Ogham Blackberry here on Muddypond's website. Also, some really lovely blackberry recipes on her Hedgerow Cookery page. 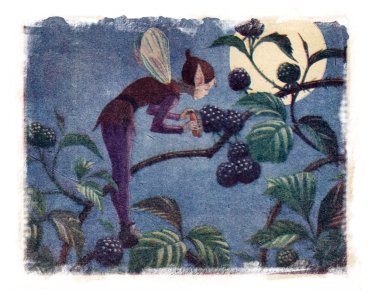 ﻿
Illustration by Margaret Yardley from 'The Fairy Shoe Black' 1945
Here is a favoutite poem, written in 1922 by Walter de la Mare,
and some more perfectly beautiful vintage faery art

There was an old woman went blackberry picking
Along the hedges from Weep to Wicking.
Half a pottle-  no more she had got,
When out steps a Fairy from her green grot ;
And says, ' Well, Jill, would 'ee pick 'ee mo ? '
And Jill, she curtseys, and looks just so.

' Be off,' says the Fairy, ' As quick as you can,
Over the meadows to the little green lane,
That dips to the hayfields of Farmer Grimes :
I’ve berried those hedges a score of times ;
Bushel on bushel I'll promise 'ee, Jill,
This side of supper if 'ee pick with a will.' She glints very bright, and speaks her fair ;
Then lo, and behold ! she has faded in air.

Be sure Old Goodie she trots betimes
Over the meadows to Farmer Grimes. And never was queen with jewellery rich
As those same hedges from twig to ditch ; 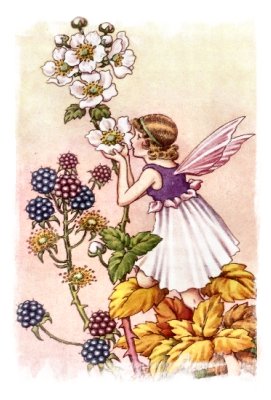 And be sure Old Goodie went back to Weep,
So tired with her basket she scarce could creep.
When she comes in the dusk to her cottage door,
There 's Towser wagging as never before.
To see his Missus so glad to be
Come from her fruit-picking back to he.

As soon as next morning dawn was grey,
The pot on the hob was simmering away ;
And all in a stew and a hugger-mugger Towser and Jill a-boiling of sugar,
And the dark clear fruit that from Faerie came,
For syrup and jelly and blackberry jam.
Twelve jolly gallipots Jill put by ;
And one little teeny one, one inch high ;
And that she's hidden a good thumb deep,
Half way over from Wicking to Weep.
Walter de la Mare 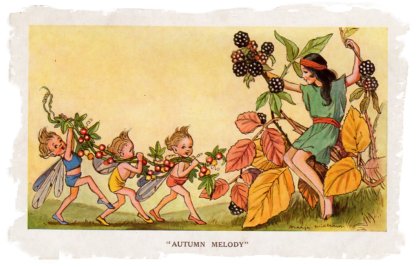 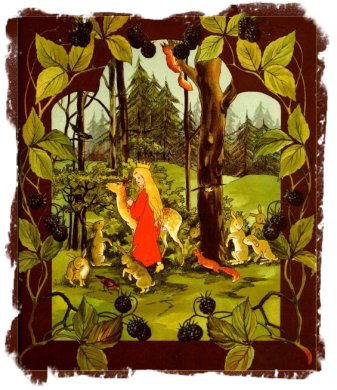 Illustration by German artist Sibylle Von Olfers from
'Bellaroontje, Het Woud-Prinsesje'  - 'The Princess in the Forest'  first published c1920
Remember - don't ignore your faery-tale folklore -
NO MORE FRUIT OF THE BRAMBLE after the old day of MICHAELMAS!
(Want to know why? Read the story here on Muddypond's Bramble Ogham page)
Posted by Muddypond Green at 14:46