How small and nervous elves might interact with large and fearsome spiders .... 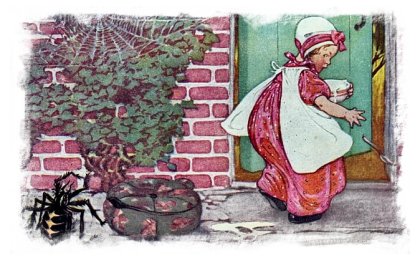 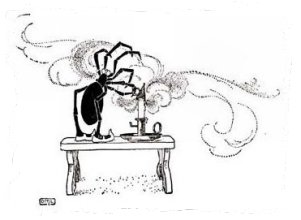 Hedgerow faeries are fond of spiders of all shapes and sizes, and most are welcome in the woods. Their cobwebs are really invaluable for use as bandages just for a start - each strand having a sticky, coagulative action, perfect for staunching deep cuts.

Just occasionally an arachnid with more malicious tendencies might move in - and that can spell trouble ...

Illustration at left is by Olive Long, 1902

Here is a small cobwebby poem which you may not know. Amongst the verses are pictures by various artists illustrating spiders of the fiercer looking variety ... 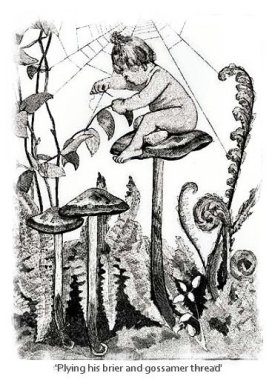 The Elf and the Spider

Poem and first illustration by Mary Mapes Dodge
from 'When Life is Young' pub 1894
Perched on a stool of the fairy style,
An elf-boy worked with a mischievous smile.
"That careless spider," said he. "To leave
His web unfinished! But I can sew:
I'll spin or sew or darn or weave-
Whatever they call it - so none will know
That his spidership didn't complete it himself,
Or I'm a very mistaken young elf." 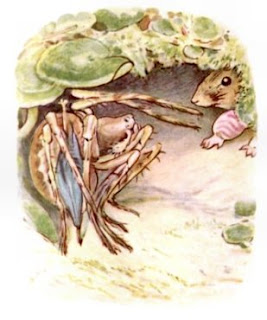 Well, the wee sprite sewed, or wove, or spun,
Plying his brier and gossamer thread;
And, quick as a ripple, the web, all done,
Was softly swaying against his head
As he laughed and nodded in joyful pride.
Ho! ho! it's done!
Ho! ha! what fun!
And then he felt himself slowly slide -
Slide and tumble - stool and all-
In the prettiest sort of a fairy fall!
Illustration left by Beatrix Potter
from 'The Tale of Mrs Tittlemouse'
pub. Frederick Warne 1910 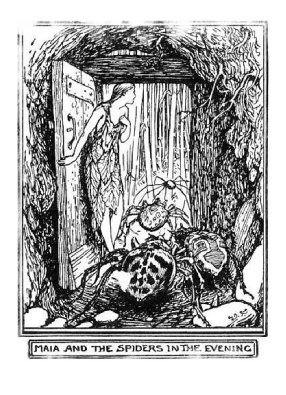 Up he jumped, as light as air;
But oh, what a sight,
What a sorry plight -
The web was caught in his sunny hair!
When, presto! on sudden invisible track,
That horrible spider came lumbering back:
"WHO'S BEEN AT MY WEB?
WHAT HO! COME ON!"
And he knotted for fight,
The horrid fright!
But the elf was gone -
Poor, frightened fay!
Nothing was seen but a tattered sheen,
Trailing and shining upon the green.
Illustration right by H. J. Ford
from Andrew Lang's 'Olive Fairy Book' 1907 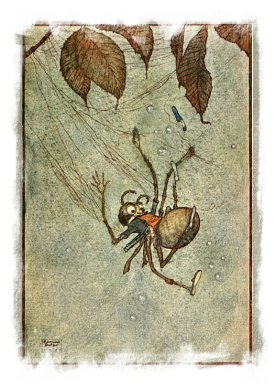 But all that night, with dainty care,
An elf sat tugging away at his hair.
And 'tis whispered in Elfland to this day
That any spider under the sun
May go and leave his web undone,
With its filmy thread-end swinging free
Or tied to the tip of a distant tree,
With never a fear that elfin-men
Will meddle with spider work again.
Illustration left by Edmund Dulac
from 'Fairies I Have Met'   Mrs Rodolph Starwell 1910 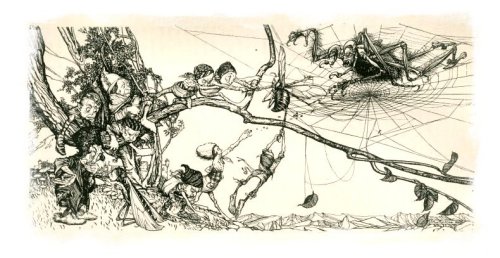 Leaving thoughts of spiders behind, but staying firmly in the wonderful autumn sunshine we're enjoying at the moment - if you're interested in British traditions, you might enjoy the annual  'Kentish Hops and the Faversham Hop Festival' over on my main web site diaryblog.
Posted by Muddypond Green at 14:43