Snail Jelly? Never will it darken our enchanted doors! .... 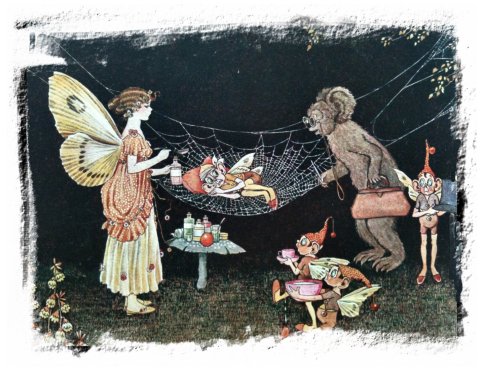 Illustration 'The Wee Sick Goblin' by Ida Rentoul Outhwaite
At dusk, on the May Day, a Goblin was brought into our midst. He's a terrible colour and can barely stand because his knees will tremble. He seems very mal-nourished and we think he's suffered some sort poisoning from a surfeit of tree-fungus, or possibly bluebell stalks.
Old medic Wala B.Bear has suggested the following remedy - taken DIRECTLY from the late 17th century work by John Chambers. 'A Pocket Herbal; containing the medicinal virtues and uses of the most esteemed native plants; with some remarks on bathing, electricity, &c.'
And, yes, I pledge my promise to you that this is a genuine recipe:

'Jellies prepared from any animal substance should be taken as often as possible. Snails and Earth Worms, boiled in milk, are very serviceable.
Take fresh gathered Snails, as many as you please, take off their shells, and boil them in new milk to a Jelly. While hot dissolve in every pint a drachm of Balsam of Peru, and 2 ounces of the Syrup of Tolu.
Jelly of Earth Worms is made in the same manner, except that the Worms are well washed from the soil, wiped in a cloth, and cut in pieces of an inch long.
After boiling in the same manner as above, you may add any sort of spice, and sweeten to your taste.' 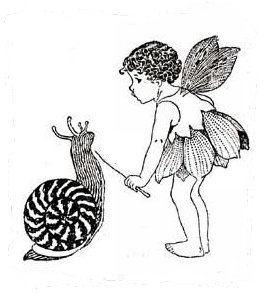 Will they never learn? It's the work of Wood Guardian Fae to look after sweet natured creatures like snails  (see left) - and how would this rich soil of ours prosper without the chewing and burrowing of the earth worm?
Jelly indeed!

We'll try our own recipe thank you. There'll be herbs and bark and minerals stirred with an Ogham Tree wand under the new moon - and no creature shall be harmed in the making!

Posted by Muddypond Green at 15:11